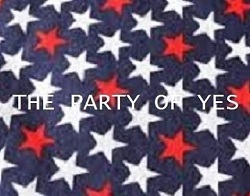 Over 80 million Americans - more, not less, than half of those who voted legitimately on November 3rd - still fervently believe the 2020 Fauxlection was itself a Coup, the first in History effected via Artificial Intelligence, both software and hardware hacking and manipulation, with the consent of totally corrupt Media.

The Generals have a right to speak out, as do all American citizens, especially when their views have widespread, albeit non-unamimous, support among Conservatives, who still are - whether the Left likes it or not - probably more than 1/2 of all legal American adult citizens.

A. Why would anyone want to utilize a Facebook Group - "secret" or not - for anything anymore? I guess some non-Tech-savvy people think it's easier than other sites, when it is, in fact, the opposite. There are so many alternatives, with many more to come.

B) Why is GAB posting so many NBC stories - inevitably both silly and false - to its News Feed lately? This is one Enemy we don't need to know - really - since they never break anything worth reading anymore.

C) But the ongoing "QAnon as Bogeyman of the Right" idiocy demonstrates again that QAnon needs to come out of its cave of Anonymity and stop embarrassing the Patriot/Conservative population and our Agenda. Either they are real, true, honest Patriots and Conservatives, in which case they should identify themselves and be proud of what they are. Or they are simply a massive Joke perpetrated by Globalists or Islamists or a corrupt FBI or possibly the Chinese government for the sole purpose of tarnishing the reputations and Agenda of actual Patriots and Conservatives. Time to put up or shut up once and for all!

And once again, Andrew, and everyone else on GAB who honestly thinks Free Speech is our Highest Priority as Conservatives and Patriots:

There IS literally disgraceful Anti-Semitism and Misogyny at GAB, literally ALL of it - by which I mean 100% - posted by Anonymous GABbers cringing like the cowards they are behind the cloak of Anonymity.

We don't know who they are, who sponsors them, who funds them, or whose operatives they may be.

This is not real Free Speech. This is Propaganda, almost certainly, many of us believe, from those who far from being our friends, are actually our sworn enemies.

If the ability to post Anonymously were removed from GAB, we believe very close to 100% of all Anti-Semitic posts or Misogynistic posts would miraculously disappear.

Once and for all, the concept of Free Speech must be thoroughly divorced from the concept of Anonymity. If GAB championed this divorce, GAB would gain enormously positive recognition and be seen as a hero, rather than as one of those bamboozled by Anonymous Bad Actors who are not on the side of the Conservative or Patriotic agenda - and may very well be working actively against us.

11
loading...
Donald Trump's Team Sought Stake in Gab But Was Rejected, CEO Andrew Torba Claims
www.newsweek.com
Gab's founder and CEO, Andrew Torba, said in a post this week that the platform is "not for sale."
9
Dissent
2
72 comments

I believe - as do many now at GAB - that the Anonymity issue is as or more important than the Free Speech issue. Most at GAB do believe in literally blanket Free Speech, the ability to say and write and publish and broadcast anything whatsoever.

But Free Speech dies in any milieu where Anonymity prevails. There is no utility to blanket Free Speech, if listeners and readers have no idea from where and whom it is emanating.

The sites which will succeed in the long-run are those which can combine the concepts of protected blanket Free Speech and vetted and verified participants in Free Speech discussions, actual Humans who are not afraid to be identified and stand behind their opinions and publications, controversial or not.

Celebritization has vastly aided Globalization and every other horrible thing which has happened to this Nation and this World over the past few decades.

If you are a true Patriot and a true Conservative, you should take a stance against all Celebritization and everything that aids and abets it, starting with the Followers-Following system and the related concept of Anonymity.

1
loading...
After years of trying to curb QAnon messaging, Twitter suspends more than 150,000 accounts
www.wnd.com
(CBS NEWS) -- Twitter officials say they tracked QAnon for years, as adherents of the conspiracy theory spread misinformation and vitriol on the platform. While Twitter monitored, collected data and tried to suppress the reach of QAnon accounts, it had stopped short of outright banning them. That changed after the Capitol riot. On January 12,…
0
Dissent
0
11 comments

Anonymity and Free Speech have nothing whatsoever to do with one another.

Like most at GAB, I believe in absolute blanket Free Speech, the ability to say, write, or broadcast absolutely anything one wants, no matter how offensive it may be to anyone or everyone. If we don't want to listen, we should - again in every case - be able to block, mute, or simply turn off the channel.

But Anonymity is something quite different, and I believe it has badly hurt the cause of Free Speech in this country, especially recently. If someone - anyone - is saying or writing or broadcasting things that are offensive to some or many, it is far better for them to admit who they are and what agenda, if any, they represent. Otherwise, it is easy for political or cultural enemies of any stripe to brand such anonymous speakers or posters or broadcasters as being . . . . whatever the heck they don't like.

This kind of blanket bias by our political and cultural opponents has lately hurt mostly Conservatives, but it could just as easily, in another time and place, hurt those on the Left or in the Middle or any other constituency or group.

And sometimes - which, in fact, may possibly be the case with QAnon - anonymity can essentially be a joke, a dirty trick, an attempt to discredit one's political and cultural enemies by making it appear that they are something they are not.

If QAnon refuses to identify its leaders and followers, who actually can vouch for the fact that they are Patriots or Foreign Operatives, Conservatives or Leftists or Those Without Political Affiliation, Adults or Schoolchildren Having Fun?

This is true of any kind of Anonymity. It is not just rarely, but very often, utilized by Bad Actors in an effort to hack or spread Malware or malign or libel or bully without presumed consequences.

As a Free Speech site, GAB and GAB users need to have a serious site-wide discussion about Anonymity and its usefulness - or the opposite - to the Patriot cause and Conservative agenda.

Levine was extremely talented. And even though he was at the other end of the political spectrum from most of us, we felt the "sexual improprieties" scandal he endured was pretty darn ridiculous.

If you don't remember it, it came during the Roy Moore faux scandal in Alabama. The Left, led by WAPO and Bezos, were destroying Moore's reputation over allegations about "sexual impropriety" from a full 40-45 years earlier, which is IDIOTIC. That's when they started in on Levine - although in his case, the allegations involved teenage boys instead of teenage girls - from 40-45 years earlier.

Neither the Moore nor the Levine case involved rape nor violence nor trafficking - i.e. anything that might conceivably matter decades upon decades later. They involved flirting and maybe some mild (consensual) physical contact.

In any case, if you are a public figure - or a non-public figure! - over the age of, say, 50, let alone 65 or 70, you are probably a completely different person from who you were at age 20 or 25. Plus, as Conservatives supporting the Western Judeo-Christian tradition, as People of Faith, I think we're supposed to believe in Forgiveness as a concept, are we not?

Well, I for one was outraged at the treatment of Roy Moore, and the synchronous James Levine scandal was more of the same.

We need to stop these ridiculous and malicious attacks once and for all. And - sorry if some disagree - the best and easiest way to do it is to ban Anonymous accounts - totally, no exceptions. This has nothing to do with Free Speech. It has to do with Security. Hackers are making their way into the system by registering under false or anonymous names and addresses, giving all false data and bios. It is OK - cowardly, but OK - to use an anonymous handle within GAB. But GAB itself has to institute a much better system for making sure everyone who uses the site is a real human being, whose existence can be verified.

I'll bet it was Bill and Melinda Gates.

0
loading...
Pandemic will be with us until EVERYONE on earth given Covid-19 vaccine, says Merkel after G7 summit — RT World News
www.rt.com
The coronavirus pandemic can only be considered beaten once everyone in the world has been immunized against Covid-19, Germany's Chancellor Angela Merkel said, after she'd met with the G7 leaders at a virtual summit on Friday.
0
Dissent
4
41 comments

Our Teams will hunt down the Non-Vaccinated to the Four Corners of the Earth - and beyond! We are sending them to Tuvalu! Antigua and Barbuda! St. Helena! Pitcairn Island! Antarctica! And if there are some who have escaped to Mars, we will get them, too!

We believe Politico's (hilarious, actually) "58 percent" must have included: A) only Illegal Aliens B) only those living in Hollywood, San Francisco or Portland or C) only those employed by the MSM, including, of course, Politico, which was once - Yes, really - a responsible and ethical publication.